I was teaching “housing” to a literacy class one morning, and I passed around a pile of photos. The photos were of places I have lived: a tiny Japanese apartment with tatami mat floors, a windowless room in Kathmandu, a cave in Turkey, the Canadian bungalow I grew up in. I had photos of residences I have visited: a villa in Istanbul, Windsor Palace, an orphanage in Bhaktapur, a yacht in the Mediterranean, a hut in Kerala… a floor-less tent in Kurdistan. 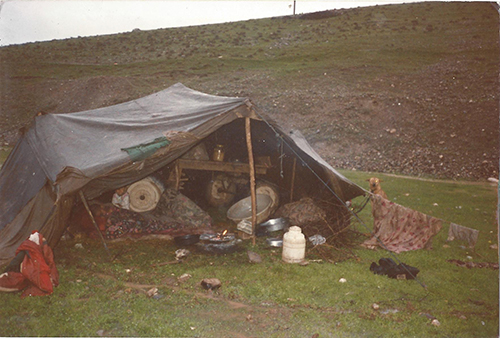 A shout rose, “Laurie, my house! My house same!”

Other students joined in- “Yes, same my house! Refugee camp!”

A number of the students were refugees from Bhutan who fled to Nepal 2 decades ago. I was shocked at the recognition- this tent, this shocking poverty- was getting grins of recognition.

I suppose refugees’ homes are similar whether they are great groups of tents (more than 35,000 lived in the Nepali refugee camps at their peak) or 54 people in 3 tents on a great plain (the Kurdish refugees that I met in 1996). Some camps are big enough to attract aid; some are isolated and without aid. But home is home and even in refugee camps I hear of pets, sickness, births, friends, jobs, domestic abuse, alcoholism and weddings.

Lately I’ve been hearing a good many refugee stories- at fundraisers for Syrians, on the radio and in the newspapers. I heard a Vietnamese refugee speak of her experience as a “Boat Person” in 1978: piracy on the open sea, arrival at Malaysia who turned them away (“We’re full”) and the heroic captain who took his over-filled boat of 300 desperate, sick and twice-robbed passengers back to the Malaysian coast in the middle of night and destroyed the floor of the boat so that it would sink forcing them all to swim ashore where the Malaysians had no choice but to accept them as refugees. And then finding a way out of there and on to Canada, learning English, settling and integrating.

A refugee from Iran told of sitting on her couch ducking as the bombs whistled overhead, yearning to go to school and then the bombing of her school. Just 10 years old and haunted by the school superintendent who had lived there with his family- all were killed as she sat her couch. Now she is a successful professional in Canada- a physician, a mother who sometimes doesn’t want to sleep and see that family in her nightmares.

A young man from Congo who was captured and forced to be a soldier at age 11. He escaped and ran through the jungle for three days. He is a student now at an Ottawa university. He apologized: “My story is short because my age is short.”

And this week a CBC Radio interviewer will come to my school to interview refugees and broadcast their stories. Well, there’s no shortage of stories at my school of 166 students, a third of them refugees. We have a Syrian family already: the mother and father in English class, a preschooler in the childcare. I met the woman in September. “From Syria?” I asked. “Yes”, she understood. “Welcome,” I said, “I am happy you got here.”

The stories are similar. They are of loss and fear and desperation. There is terrible grief for the people left behind. The refugees are similar too, in that they are all wounded. (We have a student who lost her eye when her neighbour’s house was bombed in Baghdad- she considers herself lucky. We have students with bullets in their bodies, students who limp….) They are wounded emotionally and mentally- sometimes they cry and tell the teachers they are like their mother, their sister who died, only because we give them kindness and attention. They can’t focus when they first arrive at school, often still in shock at the changes in their lives.

What do they say about Canada? “I love Canada because Canada is safe.” “Canada is peace. I miss my country but no peace in my country.”

I will never forget a woman who came to school one morning absolutely ecstatic: “My husband go jail! Police come! My husband hitting, hitting. Neighbour telephone 911. Neighbour! I don’t know neighbour- she call police! She help me! My country no one help me. Everyone know refugee camp- my husband hitting, hitting, me crying, crying. No one help me. Canada help everything. I love Canada. I love Canada people.”

I was teaching opposites one day: hot- cold, tall-short, rich-poor. I asked my student, “Are you rich or poor?”. This refugee with a spouse and 2 children receives about $2,000/month from social assistance. Her rent is $1,200. It doesn’t include utilities.

“I am rich,” she answered, smiling.