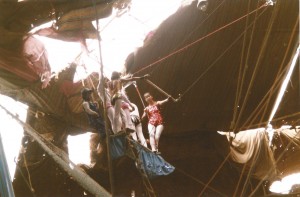 My obsession with circuses started with Toby Joins the Circus, a childhood story. I love Water for Elephants and The White Bones; I’ll read anything about elephants or circuses. I land in a new country, and one of my first questions is: Do they have a circus here?
The circus in Katmandu was open every day- a permanent set-up as far as I knew. I walked there with a cotton mask covering my nose and mouth because the smog I’d been inhaling for weeks was affecting my lungs. After a long wait, the audience was allowed in. We were about 30 in total- I was the only white person. 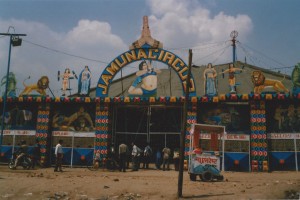 I’d been traveling through India and then Nepal for months, so I was accustomed to the shamble and poverty. Still, the large rips and holes in the circus tent surprised me. The canvas was a rag held up by poles, shafts of sunlight pouring through the holes. There seemed to be more holes than canvas and I wondered: Why bother putting it up? We sat on wooden benches surrounding a circle of packed earth, sweating in the humid heat even at 10 a.m.
My heart sank as the clowns and tricksters entered the single ring. Most of the performers were children: wily strong children who didn’t smile much. They piled themselves in every possible combination and contortion on bicycles, horses and poles. They swung from fragile-looking bars attached to the wires above them, and tumbled gracefully into flips and leaps. The animals were clearly not pets; they were wild, lean, heavily chained. The big cat show was frightening, mostly because I didn’t trust the strength of the rusty locks and feeble cages. 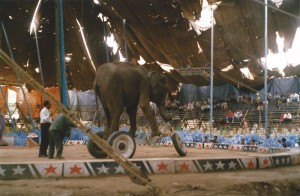 It’s always the same debate with me- is it better to boycott attractions that treat animals and, in this case, children, poorly? The Nepali circus and the Indian zoos with their tiny cement cages would not have noticed my boycott- ah, but what if all the travellers made a statement en masse, you ask? I still don’t know- I didn’t see any white tourists at the busy zoo in Jaisalmer or at the circus in Katmandu; their paying visitors were mostly Indian and Nepali.
For me, the experience is cultural. After all, in Canada, those children would have been in school. But in Katmandu, these children had work, a “roof” and food to eat. I had only to walk the streets to see hungry begging children, who were without the essentials of life.
I won’t forget one boy in particular, about 10 years old, who I noticed throwing some garbage onto one of the large piles along a narrow Katmandu street at dusk. To my astonishment, he then stood back in a runner’s starting position. Then he ran, leaped above the pile of garbage, kicking his feet out so he landed flat on his back in the centre of the garbage pile. He sank a bit, into the cans and plastic, so that he was almost out of sight. I waited but he remained there, and I realized he’d settled into bed for the night. I thought about rats.
In that environment, is it a bad thing to support the circus performers by attending? I don’t know…but whether the ticket is $30.00 or $3.00, I just can’t walk by a circus. 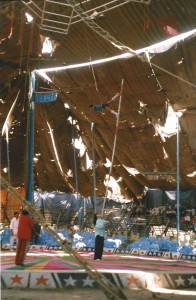