a short story by Laurie Fraser

This is a story about synchronicity. I don’t know what to make of it- I’m not religious or even spiritual, really. I was raised without churches or mosques or synagogues. I was raised without a prayer. I knew who God was, of course, but I confused him with Santa Claus- a kindly old man who could see everything and could grant any wish, give any gift…but that didn’t mean he would.

That’s what I knew about God. In my 20s, when my baby died, I asked my parents, “Do you pray?” and they both said yes. My mother was sure and clear about it, of course she does. My father was vague.

“I don’t know how to pray,” I said. I didn’t know where my daughter had gone or if I could ask God about her somehow. I was angry with my parents after that conversation. They’d given me lots of things, nurtured lots of skills…but they hadn’t given me faith. Oh, I know, my mom’s from a nut-job family of fundamentalists, and she thought she was protecting us kids from the crazy confines of religion – I’m grateful for that.

But they had learned faith from their parents and it was a resource they used, especially when other hope was lost.

I wondered, could Beca see me now? Or had she disappeared completely?

She was the tiniest baby I’ve ever seen, born and died on the same day. She was born without a sound, total silence in that room, although nurses and doctors were elbow to elbow. They had no hope and I had no faith and so they didn’t stick her full of tubes and monitors in a little plastic house. They took her away and brought her back clean, in a blanket, and placed her in my arms.

I opened the blanket and saw a pulse right through her chest- her heart was beating! How could the doctors have missed it? Mesmerized, I reached my finger toward it, and gently, the nurse stopped me from touching the pulse.

I didn’t understand. After many minutes, the beating stopped. For me, she died then. The death certificate would say Stillborn, but she wasn’t still.

But that isn’t my story.

When the anniversary of that day came around a year later, I knew I should do something to recognize the day. I was through the depression. I had adjusted to single life after her father left. I was back at work, although the two co-workers who had been pregnant with me- that club that I had lost membership in- were still on maternity leave.

I had bought a small dress, the prettiest I could find: lavender with white flowers, a white collar. I had wrapped it and put in the passenger seat of the seat of the car. And then I’d headed off to work.

Work was the best place to be. I was the only full-time staff in a community centre that was crawling with kids. We had 5 day camps chock full of children aged 3 to 12. The 13 – 15 year olds were the volunteer program, trained and supervised by me too, the most reliable of them paired with the younger children with special needs. The rest of them just ran around causing trouble. I once had to get one of them off the roof.

Once they hit 16, they could be hired. I was supervising a large group of counsellors- all students, sometimes hung over or broken-hearted or planning something wild for the kids. Like a huge piece of plastic on a hillside with a hose- a water slide for them to go crazy on, sometimes not taking turns very well.

When a flash flood poured down on us one afternoon, the campers came screaming across the parking lot from the park. The counsellors did try to get them into the community centre, but when the kids saw the parking lot had become a shallow swimming pool, they laid in the water, laughing hysterically, trying to swim, their hands and legs splashing, the parking lot looking like it had beached a bunch of fish in bathing suits.

They were soaked anyway and I stood in the downpour laughing at them, grateful the lawyers were downtown. When the thunder and lightning started, they came shrieking into the building, slipping on the floor and shaking their hair like dogs.

It didn’t rain on Beca’s anniversary. It was terribly bright and hot, just like the day she was born. I was sweaty and maybe stinky as I got into my car at 5 pm and saw the wrapped present. With a start, I realized I had forgotten the significance of the day.

I caught my breath and started the car. Guzzling a jar of water, driving slowly down the leafy suburban street, I recognized the irony of spending the afternoon in a hospital with a child.

Ali was fine now – his parents had met us at the hospital and taken him home. He’d choked on something in the indoor pool. His blue lips called it “foam” but even after evacuating the pool, the lifeguards hadn’t found anything untoward. Still, I reflected, it was never fun to be in an ambulance with a child, unsure of his condition, with parents and municipal lawyers to inform.

I was driving very slowly, marvelling at the irony, when something flew directly toward my windshield and loudly thunked against the front of the car. I stopped. Whatever it was, it had come out of the sky, dive-bombing my car.

A bird? Birds are too clever for that.

I rolled the car ahead a bit, watching behind me. Nothing on the road.

I went a bit further. Nothing.

It had been a loud thunk. It wasn’t nothing. I rolled closer to the curb and stopped the car.

I got out and walked to the front of my car.

I gasped. A bird was on the grill. I looked closer. One dead bird. I brushed it slightly and it did not fall. One stuck dead bird, a small one, the feathers splayed out as if it was flying.

“I’m so sorry,” I told it, familiar grief suddenly burgeoning in me like blowing up a balloon. “Oh my goodness.” Tears filled my eyes and I was hopeless, helpless. What to do?

I looked up and around and saw a woman walking past a stroller in her front yard toward me. She had a running hose in her hand, and I saw she’d been washing her van. She smiled and called my name. To my horror, I recognized her as well- a co-worker who worked at a different community centre, but who wasn’t working today. She was on maternity leave this beautiful summer day.

I was working on the other hand. I had failed to produce a crying baby. I had a dead bird stuck on the front of my car.

I felt shame, profound embarrassment, my baby-killing nature on display, but I smiled and quickly blinked the tears away.

We had to ask how are you and how is the baby and how is work, no mention of Beca, but finally to the problem at hand: a bird on my grill. She stepped back- the bird was clearly my problem, not hers. I was mortified. I can use that word: mortified.

Swallowing hard, I reached to pull the bird away. It was just a baby. Maybe it had fallen out of the nest; maybe it was trying to fly. It didn’t come off the grill. Horror gave way to panic; I had to do this and get away from this woman’s picket fence. The head was stuck in a gap between two pieces of metal. I put my thumb and index finger around the tiny head.  I wiggled it and the soft skin moved around a hard skull the size and feel of a marble. I wiggled it loose, peeled the body off the grill, stood up and looked around.

The woman beckoned to me, and I followed her with the bird in my palm. She walked to the garage and lifted the lid of a garbage can. Newspaper filled it almost to the top. I laid the bird on it, and she closed the lid.

I walked back to my car and got in. I drove to St. Mary’s Maternity Home and gave the receptionist the wrapped gift. She promised to give it to one of the young moms.

It felt a little anti-climactic.

Now I don’t know about God or synchronicity or the Universe the way some people do. I don’t know what all that means or why that happened. I can only say that it was a very important day and that I wasn’t alone in knowing that. 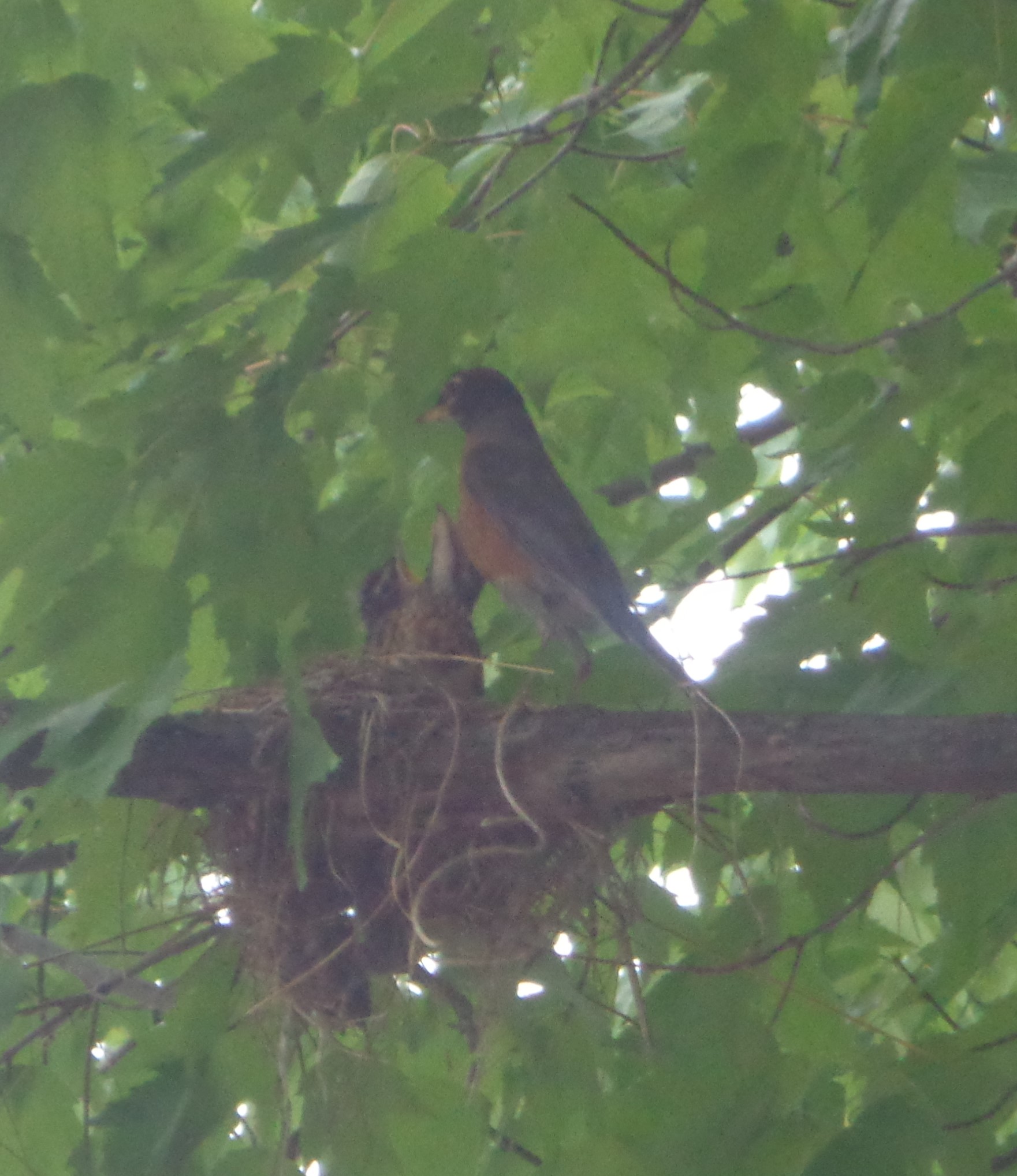 The evening before they flew the nest.