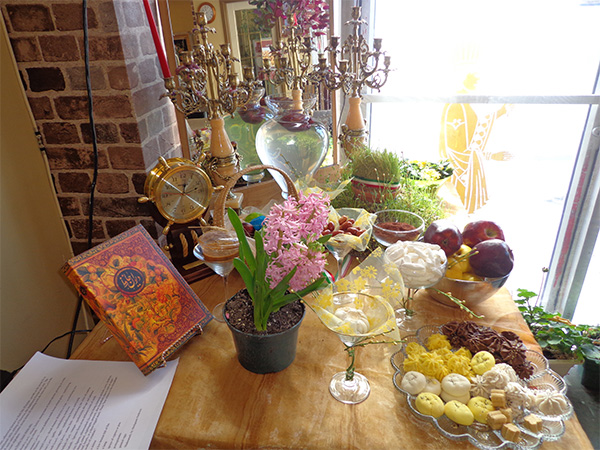 Oh happy day: the day we first feel spring in the air. The first day that shoes replace boots- the light feet, the utter joy. That’s the Canadian’s late March experience, but in Mediterranean countries, they are seeing spring blooms by now, discarding jackets, eating the first local greens.

Newroz celebrates the arrival of spring and is usually celebrated around March 20, coinciding with the Northward Equinox. It has been celebrated for centuries in Iranian, Armenian, Azerbaijanian and Kurdish cultures; it was first mentioned in Kurdish poetry in the 16th century.

In Northern Kurdistan (East Turkey), Newroz is almost always celebrated with a picnic. When I visited family there, we lugged a hibatchi-type BBQ out to the woods by a stream, played hide and seek games among the trees, sang songs and feasted on tomato salad, flat bread and chicken (killed in the backyard that morning). Sometimes whole communities celebrate together with dancing and music.

In The Word Not Spoken, Ahmet uses Newroz to divert Leigh’s fears when he tells her on their wedding night that he is a freedom fighter, part of the PKK:

Ahmet hesitated. “We tell tourists and journalists about the human rights abuse and the democracy problem here.”

Leigh was relieved. “You just talk to people?”

“Yes. We are non-violent group.”

“I go to meeting every month. Right now we are planning Newroz celebrations and demonstrations.”

Ahmet explained that Newroz was celebrated on the first day of spring in Kurdistan, comparable to a New Year’s celebration in the west. It had never been celebrated by Turks, and so, over the past decades, Newroz had become an opportunity to assert Kurdish culture and identity. Only three years previous, a crowd dancing in a village square in Mersin had been fired upon by watching Turkish tanks.

“Ahmet, you don’t go to the Newroz celebration do you?”

Leigh gets more information later in the story. By this time, she has met Kurdish refugees dying in tents, and she has started to write their story. Here Ahmet is telling her about his cell’s meeting the night before and what they discussed:

“We are planning Newroz. It is very important, a very strong day for my people.”

March 21st was only a couple of weeks away. Ahmet explained that this would be, as always, a celebration of spring and the new year for the people of East Turkey and parts of Syria, Iraq and Iran. The anti-government groups sought to protect the Kurdish people so that they could dress in traditional costume and dance in village squares without the army harassing them.

“Write this,” dictated Ahmet. “Ahmet says, ‘Freedom is not cheap. It is better for a Kurd to die dancing than in a burning house.’”

“Like that. With his finger in the air,” said Leigh, writing.

Newroz would happen no matter what, Ahmet pointed out. The people would be out. The only variable was what the army’s reaction would be. Some cities planned massive peaceful demonstrations. Others planned simple celebrations. Ahmet said the important thing was the Kurdish people would be seen asserting their identity and culture. The truth was Newroz had become a propaganda vehicle. It was an assertion of Kurdish identity, encouraged by pro-Kurdish groups. Ahmet said the largest demonstrations were organized in cities with weak Kurdish undergrounds. This would occupy M.I.T.’s (the secret police) attention. As well, none of the important leaders would attend. The goal was complete safety for the demonstrators.

“What else did you talk about?” asked Leigh.

This was my reality when I lived in Turkey in the mid-90s. Newroz was a time of fear and supreme courage. I preferred delightful family picnics to public gatherings; I hated the feeling of ducking my head, checking my back, walking in front of soldiers with guns in hand.

I cannot adequately share my shock when during later visits to Turkey I learned that the Turkish government had done an about-face and declared Newroz to be a Turkish holiday! If you can’t beat ‘em, join ‘em, I guess.

“The Turkish government suddenly announced that the Kurdish new year’s holiday Newroz, was in fact a Turkish holiday commemorating the day the Turks first left their ancestral Asian homeland, Ergenekon. The day was renamed Nevruz since the letter ‘w’ was not in the Turkish alphabet.” (Nationalisms and Politics in Turkey by Casier & Jongerden)

In Iran, a table called Haft-seen is displayed at Newroz. Haft-seen means 7S because seven items beginning with the letter ‘s’ must be on the table along with other more personal items. The seven items are: “Sumac (crushed spice of berries) to symbolize the sunrise and the spice of life, Senjed (sweet dry fruit of the lotus tree) for love and affection,Serkeh (vinegar) for patience and age, Seeb (apples) for health and beauty, Sir(garlic) for good health, Samanu (wheat pudding) for fertility and the sweetness of life, and Sabzeh (sprouted wheat grass) for rebirth and renewal of nature.” Huffpost Religion

Personal additions to the Haft-seen table may include poetry, books, a mirror (reflection on the past year), a bowl of real goldfish (new life), colored eggs (fertility), coins (prosperity), flowers (spring), and candles (light and happiness).

I photographed this Haft-seen table at Saffron Restaurant, 462 Rideau St., Ottawa. The owner was so pleased with my interest that she explained every item on the table to me. 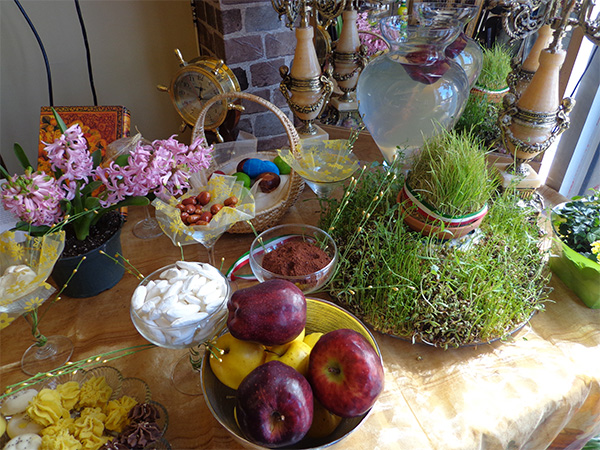 2 thoughts on “Newroz and the Haft-seen table”