A short story from Bangan Forest.

Raccoon was singing Morning Song as she ran along one of Forest’s paths. Animals of all sizes passed this way: chipmunks, skunks, deer, but tall birches on each side kept this path narrow and dark. Sun was barely out of bed, still stretching his fine arms, but Raccoon was sweating. It was so humid in early summer that heat followed animals right into shade and slept with them day and night.

Raccoon was on the skinny side and her mask was askew. She should have found a bed by now, but Dawn was early these days; there was little time to forage before Night disappeared.

Raccoon was moving so fast when she came upon Turtle that she had to hop right over him. He was a mature strong-legged turtle of enormous size. A beauty.

Raccoon had travelled a long way all by herself; she sure was happy to come upon a handsome dark-eyed turtle.

“Greetings! Where are you headed?”

Turtle adjusted his black cap. He was not fond of conversation, but he answered. “I am bringing provisions to my family.”

“I see,” said Raccoon as she eyed the many packs and boxes tied to Turtle’s back.

“You don’t see.” He nodded back toward his polished shell. “Food is inside.”

“So, what’s all this?” Raccoon motioned to the pile of boxes.

“Ah, burdens… Are they heavy?”

“What do you think?” Turtle was tired, and it made him irritable sometimes.

“I think they must be terribly heavy,” soothed Raccoon. “Can I carry one for you?”

Turtle did not answer.

Raccoon ran a circle around him. “Just one?”

“No! Go away!” Turtle knew that all raccoons were thieves and not to be trusted.

Raccoon fell back and watched Turtle’s thick legs dig into the earth and pull him forward a few inches. He flipped his feet forward and then pulled again, dragging his weight and his boxes. His muscles were clearly defined as they strained. One heavy metal box marked ‘Injustice’ was tied to his tail and as he walked, it drew a twisted trail in the earth behind him.

Raccoon picked up the metal box with her front paws. She walked upright, carrying the box still tied to Turtle’s tail. Turtle noticed how good this felt, and he said, “You have beautiful hands.”

Raccoon took this as an invitation to stay. She untied the metal box from Turtle’s tail, tucked it under her arm and began to talk. Now, no one can talk like a raccoon. Once they start, they never shut up. Raccoon told Turtle everything she knew, all her secrets, and all the important thoughts she had had until that moment in time.

It took a very long time for Raccoon to share all of this, and for Turtle to move down Forest’s path between tall birches. Time after time, Raccoon realized that she was ahead of Turtle, so excited was she and so slow was he, that she would have to stop and wait for him. She would sit with rocks or nap covered by Shade while Turtle progressed at his own pace.

It was a day of sitting with rocks for Raccoon and a day of hard work for Turtle, but at the very end, they found themselves at River’s edge. River was silver and flowing fast. Sun had started his drop toward Mother Earth and Sky chose her orange silk nightgown with pink straps.

“We must part ways now,” said Turtle, his dark eyes on Sky’s nightgown. “I will swim across River to the other side and you must continue to tread Forest’s paths.”

“I can swim,” said Raccoon and she took off her shoes.

“It is not an easy crossing,” said Turtle. “You are not heavy enough. River will toss you into Sky and she will catch you in her arms and never let you go.”

He directed her to attach the metal box to his tail again and so she did. He turned his face to Sun and readied himself.

Raccoon tied her shoes to her tail and jumped in Water. Current was strong even near Shoreline and Small Rapids could be heard by an ear turned in their direction.

“Come on!” she shouted from Water. “Why am I always waiting for you?” She showed off some new dance moves. “Hurry up!”

“We separate here,” said Turtle. “I have listened to your silliness long enough. I have important things to do, responsibilities.” He eyed Water’s edge and started a deliberate descent.

Raccoon laughed. “You work too hard!” She somersaulted into baby waves.

Turtle slipped into Water with relief. His burdens lightened, and he moved easily just under the surface of silver ripples.

Raccoon tried to grab the box tied to his tail, but Turtle swished her away. “I don’t need you.”

Raccoon swam alongside Turtle. She could talk even while she was swimming and she offered Turtle advice, a great deal of advice: how to untie boxes from tails, how to reduce baggage, how to run.

“Preposterous,” muttered Turtle, “why would I run?”

Raccoon tried to say, “It’s fun,” but River filled her mouth when she opened it. As always, River was greedy for space. He filled all the spaces he could find in Raccoon- throat and lungs and stomach. Raccoon became heavy with Water and she slipped below the silver surface.

Turtle heard silence and knew Raccoon was gone. He had secretly become fond of the raccoon who had finally shut up. He had chuckled on Forest’s path, and he was no longer accustomed to silence. Turtle reached over with one giant foot and flipped Raccoon over and then slid her onto his back. Raccoon choked and spit and sputtered until Wind found her spaces and forced Water out. Raccoon curled up among the boxes on Turtle’s strong back. She felt protected there, and he liked her weight on him.

River hugged Sky in her orange nightgown with pink straps. Sky hugged River back and got orange all over him. Even Raccoon and Turtle were silky orange for a time as Raccoon slumbered on Turtle’s back. She dreamed of waiting with rocks, as Turtle swam gently, careful not to wake her.

By all accounts, Turtle had journeyed for provisions many times and was expected to arrive without incident, without delay, without a raccoon on his back. Maybe Darkness knows what happened, or maybe Stars could piece it all together… but Moon was the opposite of full that night and so the most reliable source was unable to report.

Raccoon had been dreaming, of course, and Turtle had been charting his way as usual, but something disoriented him. Perhaps it was Darkness playing his games. There is no way to be certain how Turtle got stranded on Sand Bar, but Sand Bar is notoriously erratic, constantly shifting and changing in size. He traps his food by lying in wait.

Once Turtle got stuck, his belly in the grips of hungry Sand Bar, his flippers uselessly flapping the air, Raccoon did her best to move him. She pushed; she shoved.

“You must remove the boxes,” Raccoon said, “or you will die here.”

Raccoon used her clever claws to unfasten the largest burden, over Turtle’s big fat liver. It was full of anger. Turtle felt lighter, but he could not be moved. Raccoon took down a second box marked ‘Explosives’. Then a third one labeled ‘Past’ that had been tied much too tightly to Turtle’s soft heart. As Turtle lightened, he felt relieved… even, just a bit… happy.

At Shoreline, Turtle stopped and offered Raccoon a ride. Now, there is not a single raccoon alive who will turn down a ride on a turtle’s back. It’s like a sports car to a raccoon. Everything is fun to them. So Turtle offered a ride and Raccoon clapped her beautiful hands.

Things had changed between them.

“You are slow and heavy,” admitted Raccoon. “I feel safe with you.”

“You are fast and light,” answered Turtle. “I feel uplifted by you.”

And so it was that Turtle arrived with Raccoon on his back. They were both smiling. 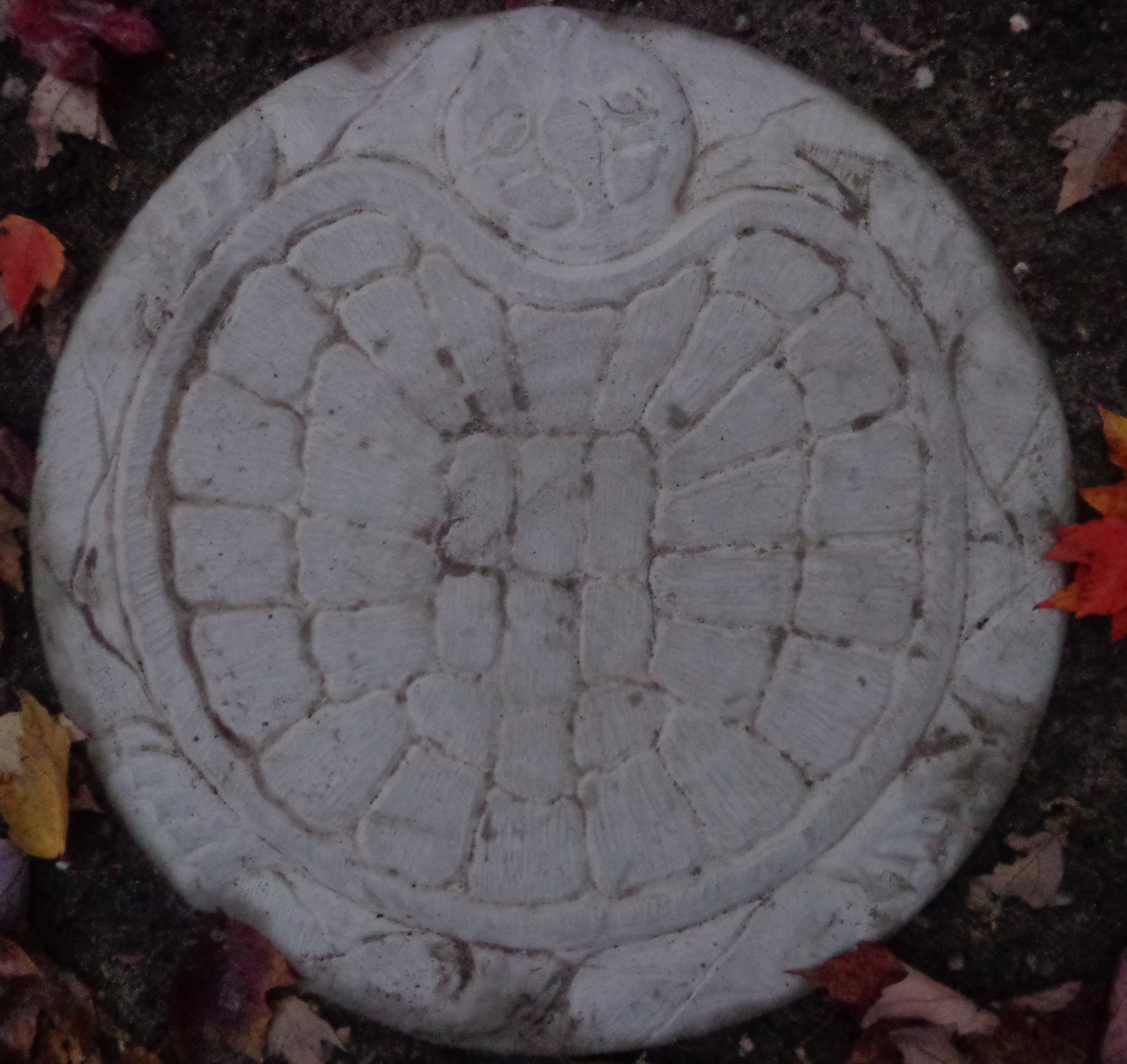