In Ottawa, a butcher opened a shop in a neighbourhood with a dense population, mostly immigrants. A small mosque was just down the street. He got regular requests for “halal” meat but when he shook his head, the people left without buying.

One day, a Muslim woman noticed a sign in his window for halal beef. She found the price to be reasonable and the beef delicious. Word spread and new customers arrived. Soon the butcher advertised “Halal Chicken” and “Halal Lamb”. For weeks, business boomed. Then one day he put up a sign that ended his good fortune: “Halal Pork”.
Do you know why? 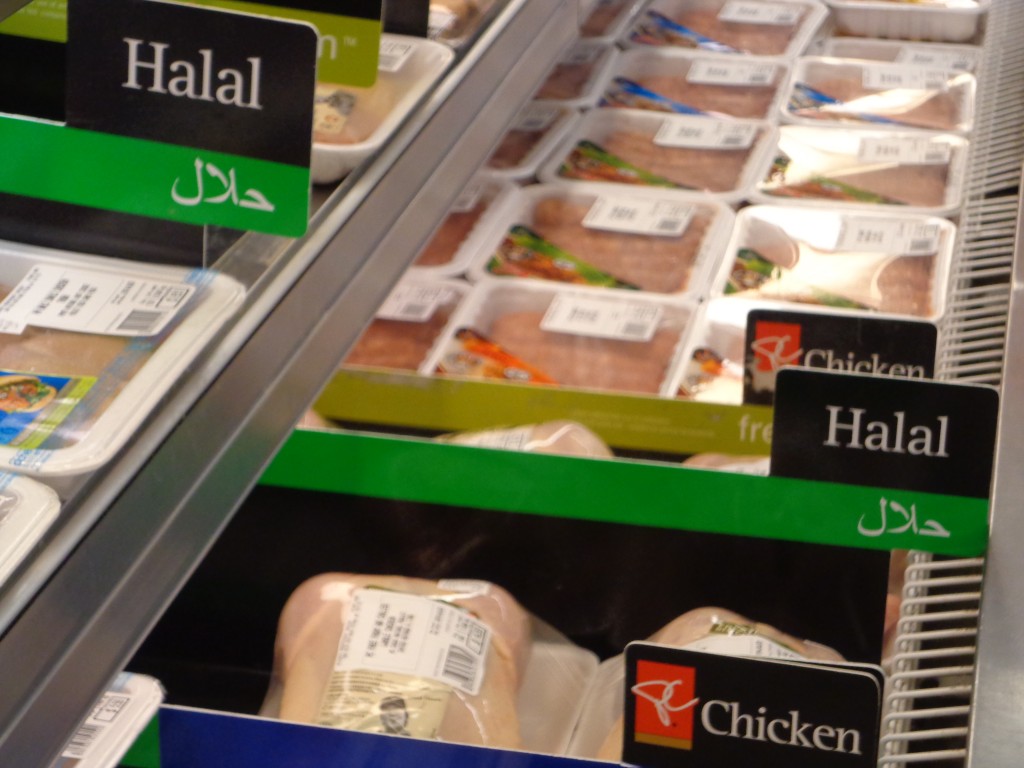 ___________________________
Halal foods are meat & products containing meat (includes some cheeses, marshmallows, gelatin, pharmaceuticals…) that have been blessed, that is, prayed over while the animal was killed in a humane way. The animal would not have eaten animal by-products.

Halal does not apply to fish. (Which is how the butcher might have advertised his confusion next: “Halal Fish”.) Muslims don’t eat pork. It is haram meaning “not permitted”.The fraudster had revealed that he didn’t get his meat from a halal butcher (who must use a sharp instrument at the throat of the animal, say the name of God, hang the carcass to bleed dry…and who would never touch a pig).

Some Muslims want their health-care products, creams, shoes, clothing (eg leather) to be halal as well. I know Muslims who don’t pay any attention to halal (they eat fast food burgers) and I know those who are extreme (they reject all food made by non-Muslims). In a Muslim country, all products are halal of course. Awareness becomes necessary when a Muslim moves to a non-Muslim country. This new vigilance usually just involves package-reading but can be as acute as a fear of contamination.

I know a devout man who follows many Islamic practices, yet he starts all his cooking by saying “Bismillah” meaning “Starting in the name of God”. He says that means he can use whatever meat is available- halal or not. That’s a twist many Muslims don’t agree with.

I brought a Kashmiri friend to a Christian’s home for Christmas dinner. He had decided he wouldn’t eat the turkey- he always eats halal, prays 5 times/day. It was some time before he said, “What is this brown juice? It is very good.” By then, he had already slurped back lots of gravy. I thought he’d be upset to learn the truth but he took it in stride.”If I don’t know it is haram, it isn’t a wrong thing or a bad thing. How can it be?” But he never drank gravy again.

At a school potluck (adult ESL), Middle-Eastern students grouped their halal offerings together on one table. When I directed some Muslim Africans to put their halal food there as well, a few Middle-Easterners objected. As people moved in and out of the room, dropping off food and going to morning activities elsewhere, this group repeatedly separated the African halal food from the Arabic halal food. No matter what I, the Cdn. teacher, argued, they just didn’t want the “black” food next to theirs, halal or not, they told me- it was probably dirty. I accused them of soiling the beauty of the halal concept: a ritual that clears/blesses food and gives a group a feeling of security…and in a foreign land, a feeling of community.